Sue Webber is our candidate for Edinburgh Western! 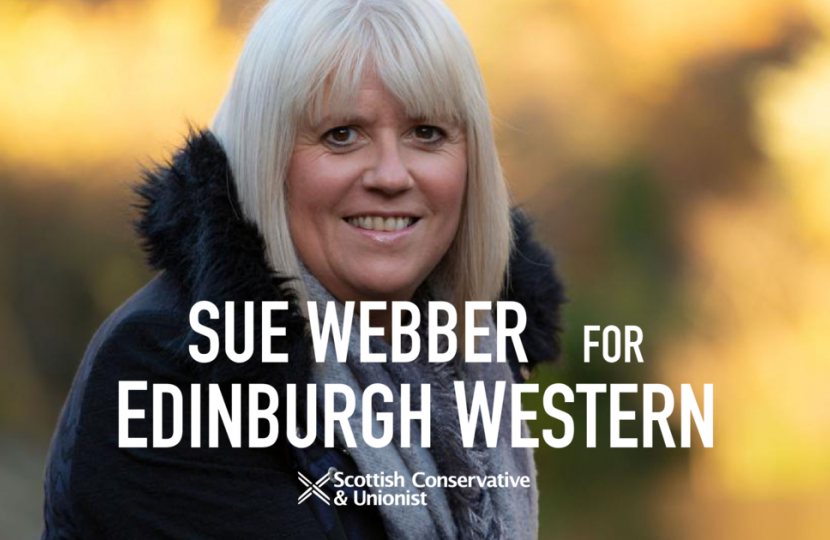 We are delighted to announce that Sue Webber has been selected as our candidate for Edinburgh Western in the Scottish Parliament elections in 2021.

Sue runs her own business providing services and medical supplies to our NHS so sees firsthand how poorly the SNP manages the priorities of the health service in Scotland. Sue has worked in the healthcare industry since 1996. She knows how it works and how we as a Scottish Conservative government can put patients first again.

Sue first entered into politics during the referendum in 2014 when she was part of the Better Together campaign. Seeing that the SNP would not let go of their separatist agenda, Sue decided to run for office herself, to represent her local area which has been poorly served by the SNP at Council and Holyrood.

As councillor for the Pentland Hills, Sue has been a powerful voice for local residents and is known as a councillor that gets things done. She is also the Conservative Group's Transport Spokesperson.

Since becoming Transport Spokesperson, Sue has fought tooth and nail to represent the views of the majority of Edinburgh residents who reject the Council's approach to implementing Spaces for People using the Emergency Covid 19 legislation. These city-wide schemes, which have been imposed without genuine consultation, are very unpopular and immensely damaging to local businesses and are having a direct impact on livelihoods.  More importantly residents views are being ignored and as are those with any disability or mobility issues. You can watch her video on this subject here.

In Edinburgh Western, Sue has fought on the side of the majority of local people who vigorously oppose the creation of the East Craigs Low Traffic Neighbourhood (LTN) alongside local councillor Mark Brown. The Liberal Democrats supported the Council administration's approach - only the Conservatives have opposed these changes from the start. Queensferry Road is next on their agenda - Sue will continue to fight this move on behalf of local people across the city but particularly in Edinburgh Western.

As Edinburgh's capital, we need our MSPs to stand up for our city and fight for the financial settlement we deserve. As the capital city our economic performance is linked directly to the prosperity of Scotland, the Scottish Government continues to drain our city of cash which leaves many services at breaking point. This is not fair and Sue is committed to a fairer settlement for Edinburgh.

You can count on Sue to fight for you and the majority of Scots, locally and nationally, where we are the strongest opposition party and the only party capable of standing up to the SNP.