After leaving Scotsman Publications in 2012, John teamed up with Ruth Davidson as the Scottish Conservatives’ director of communications and was closely involved with preparations for the 2014 independence referendum.

John said, "As a newspaper editor in Edinburgh for 15 years, I know how proud people are of our city but also how frustrated they can be about council services. Labour has been in power almost continuously for 40 years and the SNP has had a hand in running our city for the past ten years, so it’s time for change."

"I’m honoured to have been elected for Craigentinny & Duddingston, and I’m confident I can give voters a different voice in the City Chambers."

“The plunging performance of Scottish schools is just one example of what happens when a government’s priorities are all wrong and the SNP needs to concentrate on what really matters to the public.”

John is an honorary professor of journalism at Stirling University, director of the Scottish Newspaper Society and writes a weekly column in The Herald.

On Thursday 12th November, you will have the chance to send the SNP-Labour Council a message that enough is enough.

Miles Briggs, Lothian Tory MSP, is criticising the Justice Secretary Michael Matheson over an increase in housebreaking across the city. 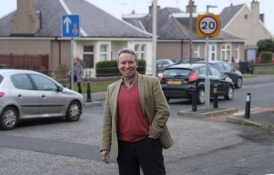