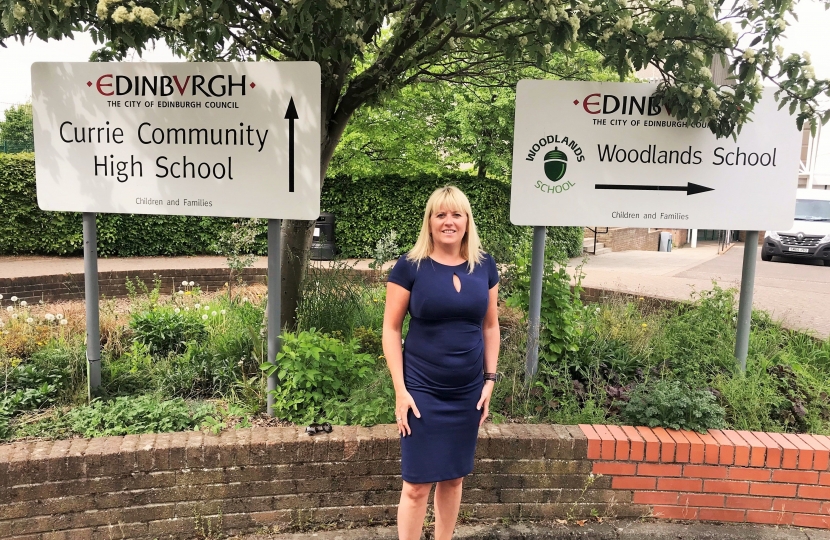 Since late November, the communities across Pentland Hills Ward have been in limbo, waiting for the SNP and Labour administration to decide on the future of secondary schooling in our area. Their proposal was to knock down Currie Community High and Wester Hailes Education Centre and to merge both schools, along with Woodlands Special School, into a new “Super School”.

Local Councillor Susan Webber has been working with parents, students and local community groups to campaign against these proposals. Susan has worked alongside the “Save Our Schools” and “Save the WHEC” campaigns calling for Labour and the SNP to retain all four high schools: WHEC, Currie, Woodlands and Balerno on their existing sites, and to refurbish or rebuild where necessary.

Susan commented, “The campaign to save our schools culminated in a protest on 15th June when over 500 parents and children descended on the Mercat Cross and then walked over to the City Chambers. The Council needed to hear all the voices across the community and this was clearly the way to do it. It reminded them of the strength and depth of feeling and how much we all value our community high schools.”

On the 21st June the Education Committee met to decide the fate of these schools. Susan and her Conservative colleagues voted to save the schools and defeated the SNP/Labour proposals.

Susan said, “I was delighted to be part of this committee as I had been immersed in this campaign since the very beginning and it meant so much to me. It was a great result and reflected all the hard work of the parents, pupils, campaigners and groups involved.”

“Yet, this decision doesn’t mark the end of it. Most of the high schools in Pentlands Hills are needing refurbished or rebuilt and this will need continued support and engagement from everyone. I am committed to continue building on the strong community links that have emerged during this consultation. It is now imperative that we hold the Council to account and ensure we maintain great schools for all the children in this area.”

Lothians MSP Gordon Lindhurst added, “I attended a number of the public meetings and was adamant there had to be a rethink. I’m pleased the schools will now stay where they are and benefit from refurbishment; it’s just a shame pupils and parents were put under this stress in the first place when it clearly wasn’t a sensible option.

“I’d like to pay tribute to everyone involved in the campaign who passionately made the case for schools staying in their communities, where they belong.”