Cllr Phil Doggart is one of the Scottish Conservative Councillors for Colinton/Fairmilehead ward.

Phil has lived in Edinburgh for 27 years, working as an actuary for several financial services companies. He lives in the south of the city with his wife and two daughters.

Speaking after his election, Phil said: “I look forward to meeting the residents over the next few months to understand their concerns for our area and their hopes for the city.”

“As the city remains an attractive place to live, there will be more demand for housing and the extra infrastructure that requires. As the city, and Midlothian, grows, more traffic will access the roads around Fairmilehead, especially at peak times.”

“It is essential that local residents can safely access the main roads for their own commutes; local businesses and facilities must remain accessible and pupils and parents must be able to safely get to school. I will work hard to represent local residents on these and many other issues.”

Moving out of lockdown has been a disaster for sport, particularly youth sport, in the city. 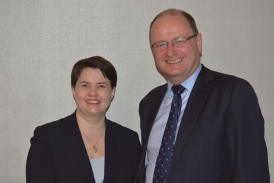